What is the Achievement Gap (and what’s the best way to close it)?

We’re well into the 21st century, but there are still some very old problems that are waiting to be solved. The Achievement Gap is one such problem. Achievement gaps exist even in good educational systems and usually are signs of socioeconomic challenges faced by minority groups.

Fortunately, there’s a lot we can do to close these achievement gaps. To do this, we have to focus on three kinds of gaps:

It’s obvious that there are no straightforward or simple solutions to the achievement gap. There are many specific strategies that can be used for addressing different types of gaps – for instance, reducing the knowledge gap early on in primary school is quite different from reducing the motivation gap in university students.

What we need is a comprehensive plan that will connect all the dots and unify all specific strategies and approaches to closing the achievement gap.

What is the Achievement Gap/Learning Gap?

Differences between students always existed. Some like to learn all about history, others prefer computer science, and yet others find pleasure in crafts or arts. Achievement Gap isn’t about performance gaps that stem from differences in students’ interests, and it’s most certainly not about turning everyone into straight A student.

Achievement Gap or Learning gap refers to educational disparities that go back to unequal treatment of various groups of people. Sometimes, the term Learning gap is used in the context of individual students who haven’t learned what they were supposed to in a certain period. Opportunity gap is another related term, and it refers specifically to various causes of Achievement Gap.

A century of the Achievement Gap in the US

In the 20th century, the political system in the US caused significant Achievement Gaps between African-American, Hispanic, and white students. Simply put, large groups of African-American and Hispanic students learned less and were more likely to have less years of education. This was primarily the result of a system which favored one race over others.

Things started to get better in the second half of the 20th century, but we had to wait for the 2001 No Child Left Behind Act, in order to see some concrete actions coming from the federal administration.

However, even a decade after the Act has been passed, disparities were still visible. In 2009 and 2011, research showed that African-American and Hispanic students, on average, still had worse reading skills and math knowledge (grades 4 and 8). In 2008, only half of all Hispanics, African-Americans, American-Indians graduated on time, compared to about 80% of American Asians and white students.

In the upper Midwest, there’s a large gap between white and Black students – particularly in Minnesota, Wisconsin, Illinois, and Michigan. On the other hand, the gap is half as large compared to Hawaii, Montana, Wyoming, and New Hampshire (measured by standardized tests such as NAEP).

In California, Colorado, and District of Columbia, disparities between white and Hispanic students are also quite large, with Hispanics living in California among the lowest in the US.

In a majority of states, however, there’s a slow but steady decrease in Achievement Gaps. For instance, the gaps in New York, West Virginia, and Arkansas are closing quite rapidly.

In the period between 1990 and 2013, only 3 states have seen the opposite trend (increase in Achievement Gaps): Maine, Vermont, and Colorado (gaps between Black and white students). Similarly, West Virginia is the only state where the gap between Hispanics and white students widened since the 90s.

What caused the Achievement Gap

There are many causes of Achievement Gap – from racism, lack of acculturation, and socioeconomic status, to sexism and availability of technology. To make things even more complex, these factors all interact with one another, and often it’s impossible to differentiate between their effects.

Generally speaking, however, socioeconomic differences are the major cause of Achievement Gaps, which is to say that Achievement Gaps are largest in places with large economic disparities. Typically, where minority groups have low incomes and low employment rates, children coming from these groups simply don’t have the same opportunities as those who come from wealthier families.

On the other hand, in some states with low racial economic disparities, Achievement Gaps persist. For instance, Wisconsin and New Jersey have similar levels of black-white socioeconomic differences. If the socioeconomic status was the only thing that affected the Achievement Gap, we would expect these states to be the same in this respect too, but this isn’t the case.

More specifically, Black children in Wisconsin have poorer math performance when compared with their peers from New Jersey. Experts from Stanford’s Center for Education Policy Analysis conclude that early education, residential and school segregation, as well as the quality of public schools are probably the causes of this unexpected result.

Immigration and all related topics such as language barrier, acculturation, differences in tradition, should also be considered if we want to comprehensively explain the Achievement Gap and find its root causes.

So how do we close the Achievement Gap?

There are many ways to close the Achievement Gap, from very specific actions and local initiatives to national legislations, laws, and regulations. Of course, the most efficient way would be for everyone to have equal opportunities, which necessitates closing the socioeconomic gap between different groups in the population.

Because most of us don’t have the power to solve an issue as large as poverty, we’ll focus here on more specific strategies:

Designing highly structured courses, consisting of daily problem-solving, data analysis, and high-order cognitive tasks, can reduce the gap between students. It’s incredible how quickly disadvantaged students can improve their performance when provided with a well-structured and intensive course.

Combining out-of-school and in-school tactics, like combining academic summer programs with the school curriculum, can also make a difference.

Taking specific contexts into consideration to develop strategies for reducing Achievement Gaps in communities with strong racial or economic segregation will be quite different than those in less segregated communities.

Recognizing the disadvantaged children early on allows interventions that can mitigate the initial lack of opportunities. It’s never late to address the Achievement Gap, but solving the problem early on is more efficient and effective. It’s much more challenging to make up for years of educational and cultural isolation.

Closing the Achievement Gap starts at home. Even the best educational system won’t be as effective if a child is unable to access support for cultural and educational content at home.

In the introduction we talked about different types of achievement gaps. All the strategies we mentioned above focus more or less on closing the knowledge gap. Motivation, on the other hand, is more elusive and harder to change.

Gamification is a great way to blend learning and having fun. The best thing is, gamification can be used in practically all grades. Most students love playing video games so gamification really has the potential to become one of the most important strategies for reducing the motivation gap.

Virtual reality technology becomes better and better each day. Soon it will be available to most schools in the developed part of the world and frankly we haven’t even started to discover all applications of VR in the classroom. Chemistry, physics, history, even language classes, VR and gamification should be able to make them much more entertaining to a lot of students.

Blended learning, a combination of traditional learning methods and online activities, is the most general approach to reduce both learning and motivation gaps. Even early on, students should be able to access learning material online and deliver assignments. Younger generations are rather tech-savvy and if today’s children can use phones, game consoles, and computers for entertainment, they can also use them for education.

Some people say that learning shouldn’t be fun and that we’re doing more harm than good if we try to mix education with play. The truth is that our educational systems leave a lot to be desired and if we don’t try new things we’ll never improve. So it’s worth exploring new ways to address old challenges.

Finally, we have the institutional gap which is a direct consequence of unequal starting points. For instance, some minorities aren’t proportionally represented in various educational institutions. Of course, we can only solve this problem if we first reduce the knowledge and motivation gaps.

The Achievement Gap is a very complex problem in education. When we solve one part of the larger issue, we’re faced with numerous other problems that have big social implications.

For instance, while we cannot say that systemic racism in education is completely eradicated, we can say that it isn’t the primary cause of the Achievement Gap in the US.

While analyzing the Achievement Gap, we learn how socioeconomic inequality affects our youngest citizens and why “the poor get poorer and the rich get richer.” There are no simple answers. The best way to close the Achievement Gap is to implement big changes to address the root causes. 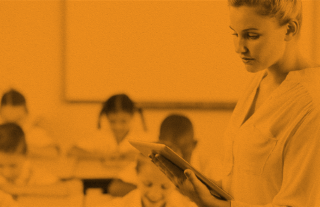 How GradeCam Can Transform Your PLCs